Reconnecting Mallacoota: after the fires

At the very eastern tip of Victoria, a seven-hour drive from Melbourne, lies the isolated hamlet of Mallacoota (Gunai/Kurnai Nations).

A renowned fishing and holiday destination, the small town's remoteness has long made it a drawcard, popular with visitors seeking a quiet coastal experience.

Yet, the town called home by 1000 permanent residents was anything but its tranquil self when bushfires indiscriminately ravaged the area during the 2019/2020 bushfires. 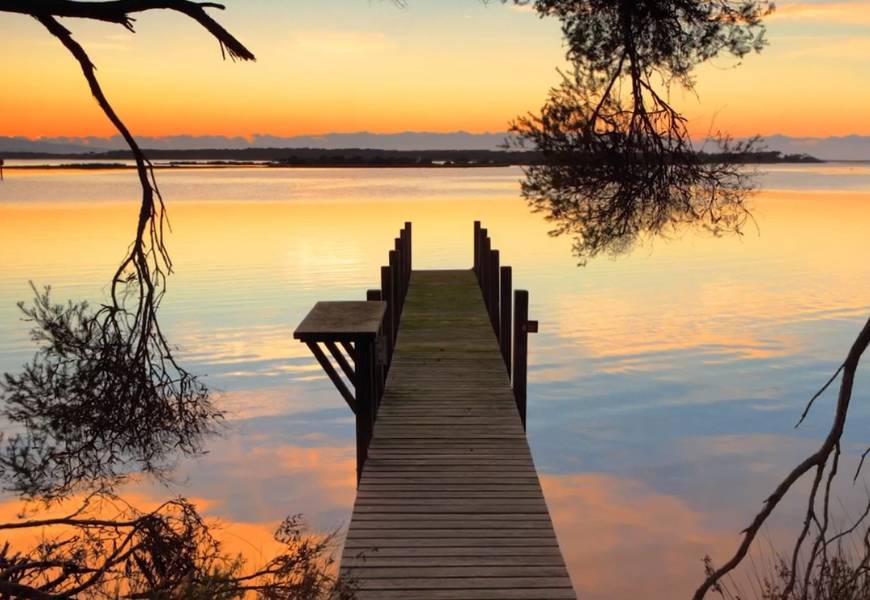 Months of severe drought and record-high temperatures fuelled a series of uncontrollable bushfires in regional Australia.

Tragically, across the country, 33 people lost their lives, an estimated 17 million hectares of land was burnt, and more than 3000 homes were destroyed.*

More than one billion animals are estimated to have died in the fires, while many rare and threatened animal, plant and insect species were also significantly affected.

In Mallacoota, not only did the catastrophic event wreak havoc and physically disconnect the much-loved town, the fire was so intense that the newly built nbn™ transit link was completely melted, delaying the activation of services over the nbn™ network in the area.

While it was something of a herculean task to connect eligible premises in Mallacoota to the nbn™ network in the first place, the good news is, it’s now complete – and with greater resilience built in.

David Appleton, Chairperson for the Mallacoota and District Recovery Association Inc. (MADRA), is pleased that connectivity is now available for the town.

“MADRA is delighted that the nbn™ network is now activated.

“Concerns over internet connectivity post fires and throughout COVID has made recovery and rebuilding activities a lot more difficult.

“The knowledge that we are moving towards improved telecommunication resilience to the area provides greater reassurance for any future emergencies, as well as supporting the town’s ongoing economic recovery and development.” 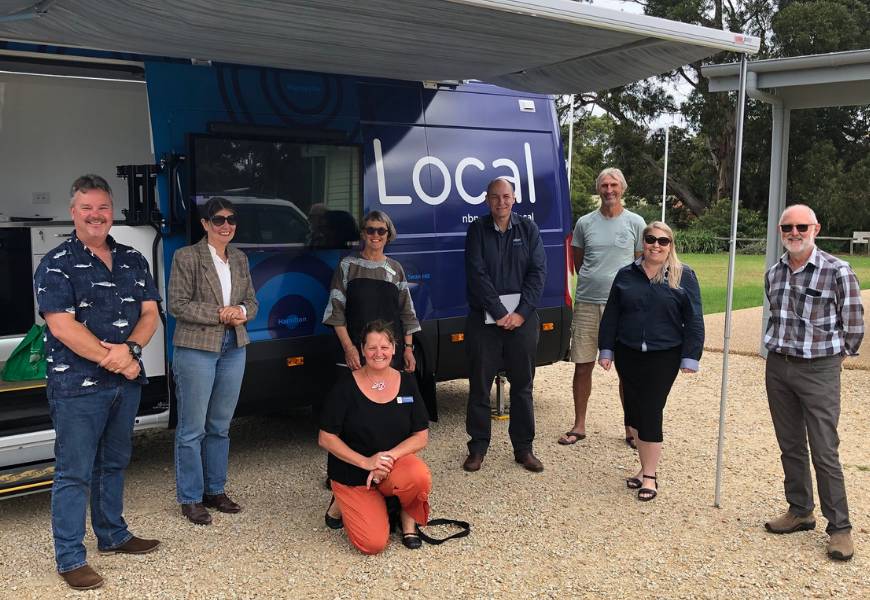 Mallacoota is set amongst Croajingolong National Park, which spans 87,500 hectares and extends for more than 100 kilometres along the rugged coast.

For two and a half years, the team responsible for rolling out the nbn™ network’s backbone grappled with the realities of building its longest continuous transit link to date.

At more than 70 kilometres long, the transit link would have to traverse the rugged terrain found between Cann River and Mallacoota – including more than 13km through the national park.

And that brought its own set of complicated issues, like gaining access and construction permission in a national park, First People heritage considerations, and potential impacts on native flora and fauna.

Despite the hurdles, nbn was committed to connecting the majority of Mallacoota via fixed line technology – the only question was how.

What is a transit link?

A transit link forms part of nbn’s 65,000-kilometre Transit Network, which enables data to be sent between 121 points of interconnect (POIs) across Australia.
Back to Top

When it came to connecting Mallacoota to the nbn™ network, it wasn’t the 7km of new build at the Cann River end, nor the 2km of existing duct in town that were the issue – it was the long distance in between.

As part of the initial scoping for the project, nbn engaged third party ecology and heritage consultant Biosis to carry out a detailed site survey of the area.

“Up to ten per cent of the total native vegetation of Victoria was found within that easement,” says Traolach O’Sullivan, Project Manager at nbn.

Along with flora and fauna, recorded and unrecorded First People heritage also needed to be considered.

The discovery of First People artefacts at the Cann River end of the proposed underground route also triggered the need for a Cultural Heritage Management Plan to be put in place, requiring the carving out of a construction ‘no-go’ zone near the highway. 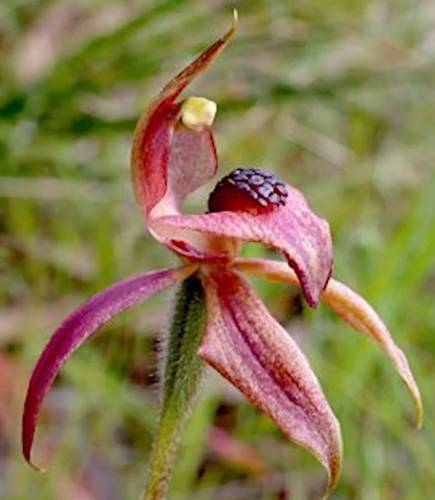 While this presented the opportunity for nbn to string its transit fibre along the network of poles rather than go underground, 13km of the proposed 60km aerial route ran through Croajingolong.

The assessments soon made it clear that the environmental impacts associated with choosing an underground build would result in the need for complex statutory approvals, with the associated cost and time difficult to quantify.

And so the decision was made to go aerial.

To ensure the long network of poles were fit for purpose, a comprehensive site survey was carried out by aerial design Delivery Partner APD, who spent four weeks out in the field walking every inch of the proposed 60km route.

This resulted in 65 of the existing 454 poles requiring remediation – also known as ‘make-ready’ works – along with the installation of three new nbn™ poles. 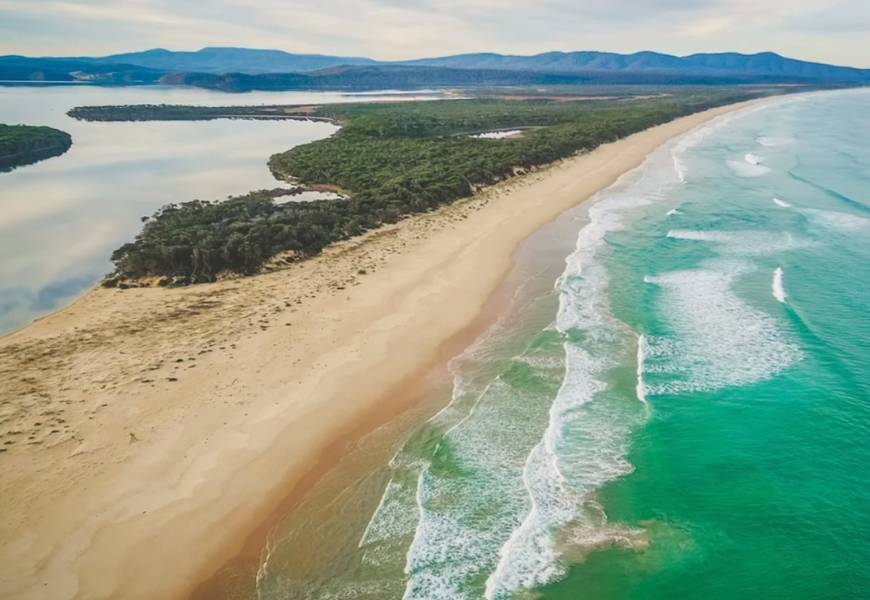 In a case of the planets aligning, nbn was able to strike a deal with pole-owner AusNet to piggyback on their planned maintenance run along the route, helping to minimise disruption to the power network and allow nbn’s team to get the job done as efficiently as possible.

As part of efforts to garner support from Parks Victoria for the make-ready works to be completed as part of Ausnet’s planned maintenance and the aerial cable stringing, the team conducted a site visit with the local Park Ranger, individually inspecting the poles that required remediation and explaining the scope of the works involved.

And the hard work looked set to have paid off as the transit link neared completion in December 2019 – that is, until the devastating bushfires. 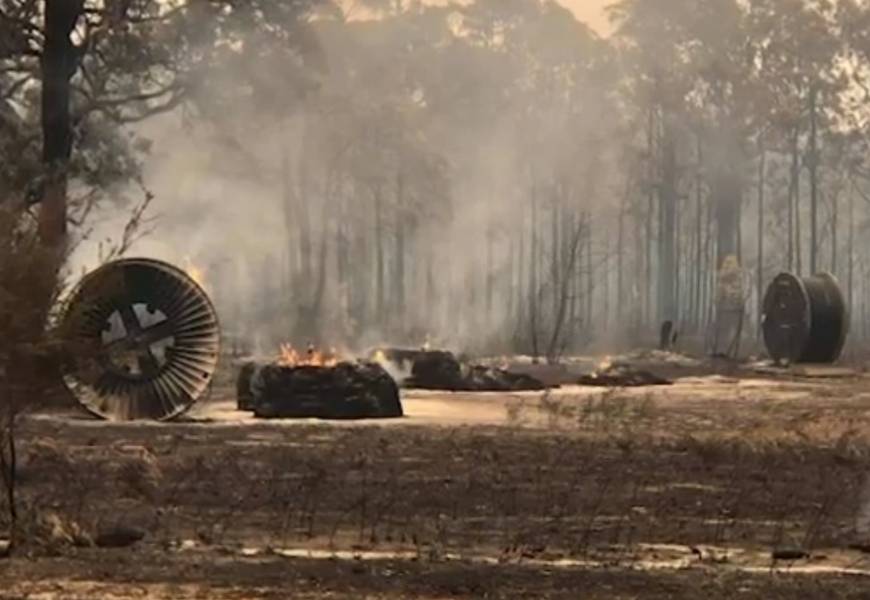 To help with much-needed local disaster relief efforts in the aftermath, as soon as it was safe to do so, nbn deployed one of its Road Muster trucks to provide free access to telecommunications, device charging facilities and real-time emergency information.

And now, more than a year later, Mallacoota has managed to rise from the ashes like the proverbial phoenix.

No easy feat – especially during a pandemic – it’s taken time, collaboration and a shared focus to help the town get back on its feet. 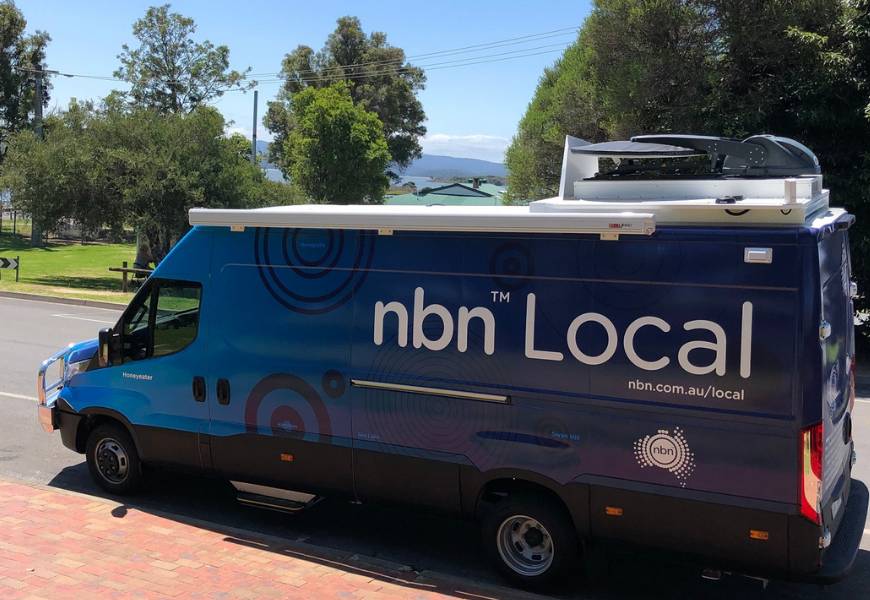 The community can now also access the benefits of connectivity with around 1000 eligible premises in Mallacoota now Ready to Connect to services over the nbn™ network.

Finishing three months earlier than expected, the nbn™ network infrastructure has been rebuilt with 62 kilometres of cable, ducts, pits and joints between Cann River and Mallacoota, including through the Croajingolong National Park.

“Connecting eligible premises in Mallacoota to the nbn™ network proved to be one of our toughest challenges in the build,” says Kathrine Dyer, Chief Operations Officer at nbn.

“I am delighted to say that – after overcoming everything from bushfires, negotiating complex access agreements through rugged national park, and operating in a COVID-19 environment – the town’s residents can now finally connect to the nbn™ network.”

Ultimately, what makes Mallacoota secluded – hidden away among the flora and fauna – is also what makes it difficult to connect services, like those over the nbn™ network, and to protect when the going gets tough.

Over the last twelve months, nbn navigated many such challenges, not least those that arose due to the transit link’s length.

With many landowners spanning the 60km-expanse, nbn worked with those including the Victorian Government’s Department of Environment Land, Water & Planning (DELWP), Parks Victoria, and the East Gippsland Shire Council, as well as private landowners to gain the necessary approvals and access.

Additionally, a 13km-stretch of transit cable needed to be deployed through the Croajingolong National Park, where those extremely rare orchids can be found. 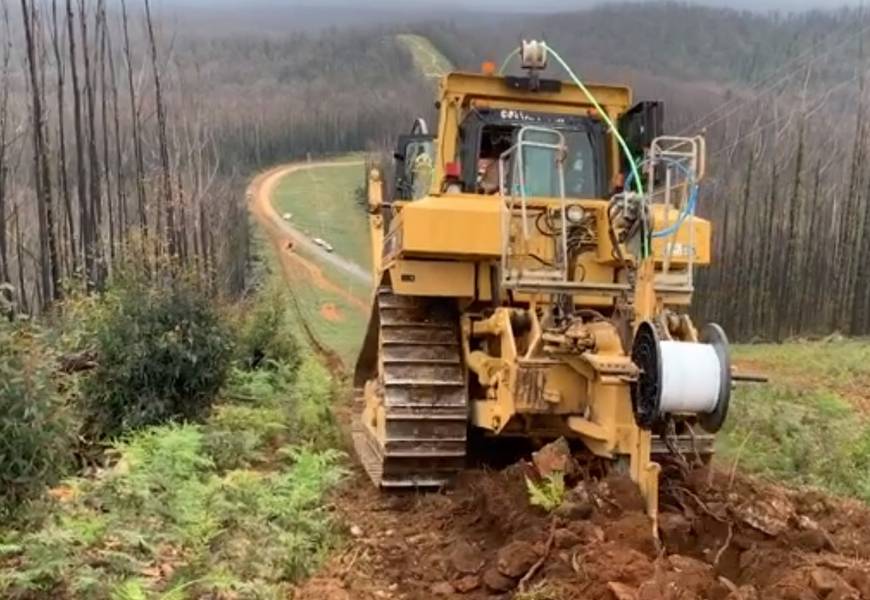 Blooming only in specific windows once a year and often hard to identify, it’s an offence under the Environment Protection and Biodiversity Conservation Act to harm the plants whether they are flowering or not.

So, to ensure our works didn’t impact the orchids in the area, we arranged for ecologists to be on site and used directional drilling during construction to offer the lowest level of ground disturbance.

Over the 2020/21 summer, torrential rain also slowed progress by making the grounds inaccessible.

And when the end was finally in sight during the last 1km of duct installation, we encountered 200 metres of rock that made drilling extremely difficult and wore out drill heads.

Despite it all, on 22 January 2021, Mallacoota was declared ready for service over the nbn™ network.

While, of course, we hope Mallacoota and its surrounds never experience anything like the 2019/20 bushfires again, nbn has built greater resilience into the rebuild to help minimise any potential future impacts.

The rebuilt transit link has been constructed underground with the help of Delivery Partner, Decon, with 44km of direct buried fibre and 18km of fibre in duct.

Both facilities are now operational and are providing the community with free Wi-Fi. 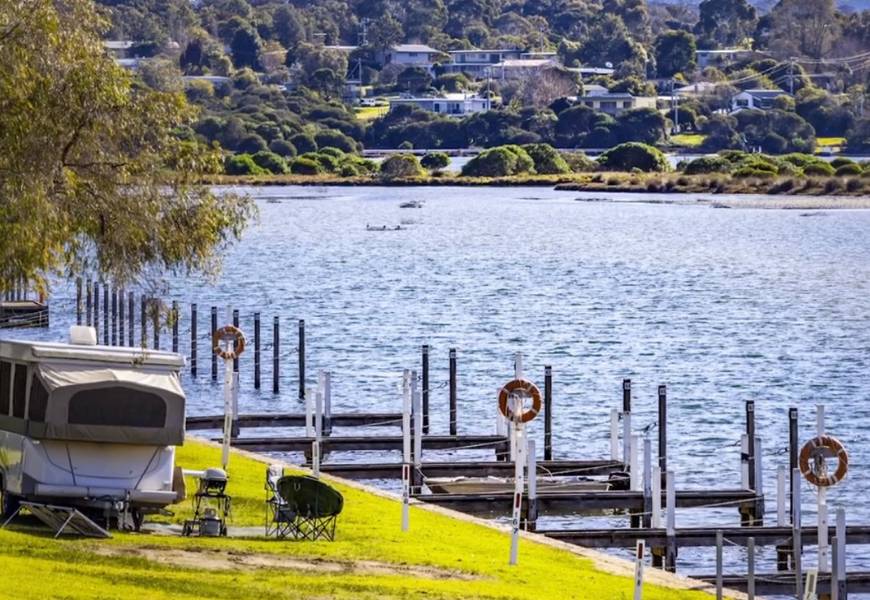 East Gippsland Shire Council Mayor, Councillor Mendy Urie said it’s great to see services over the nbn™ network being made available to eligible premises in Mallacoota, with the opportunity for improved digital access.

“We know digital connectivity is so important for residents, students, visitors and businesses – including working from anywhere opportunities – let alone during emergency events,” says Cr Urie.

“We really appreciate the hard work that nbn has put in to replace what was lost in the fires and to build back better – this time undergrounding the connection to make it more resilient.”

The council has worked with nbn and other agencies through the East Gippsland Recovery Committee and its Built Environment Working Group to support this connection.

“Improving the resilience of infrastructure in preparation for future events is a key focus of the working group,” says Cr Urie. 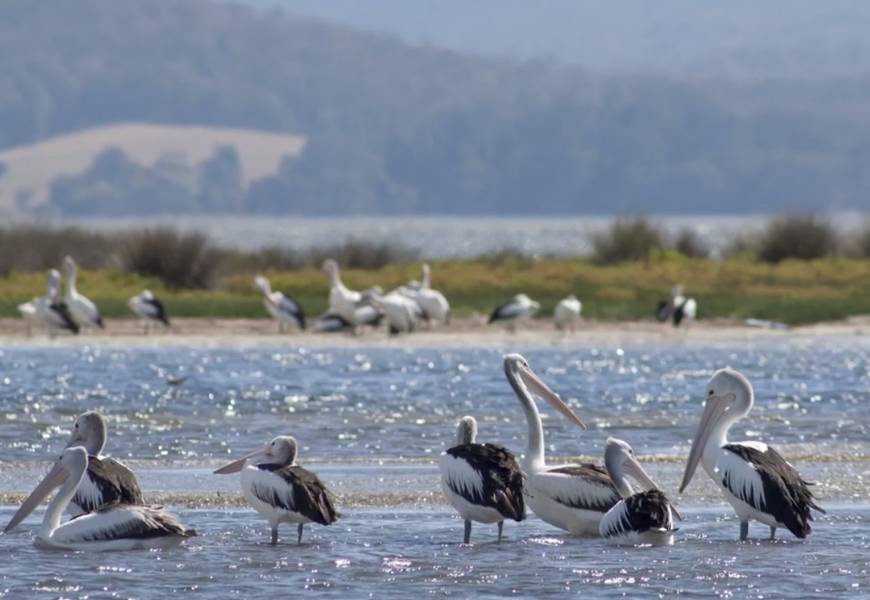 How you can prepare for an emergency

Equipment connected to services over the nbn™ network will not work during a power outage.

While some parts of the nbn™ network do have in-built power back up, power outages may last longer than the battery life.

In an emergency or event that causes loss of power, communities need to be prepared to be without landline phone and internet services for some time.

An emergency communications kit can help you to stay connected in a power outage, or if there is a disruption to services over the nbn™ network. 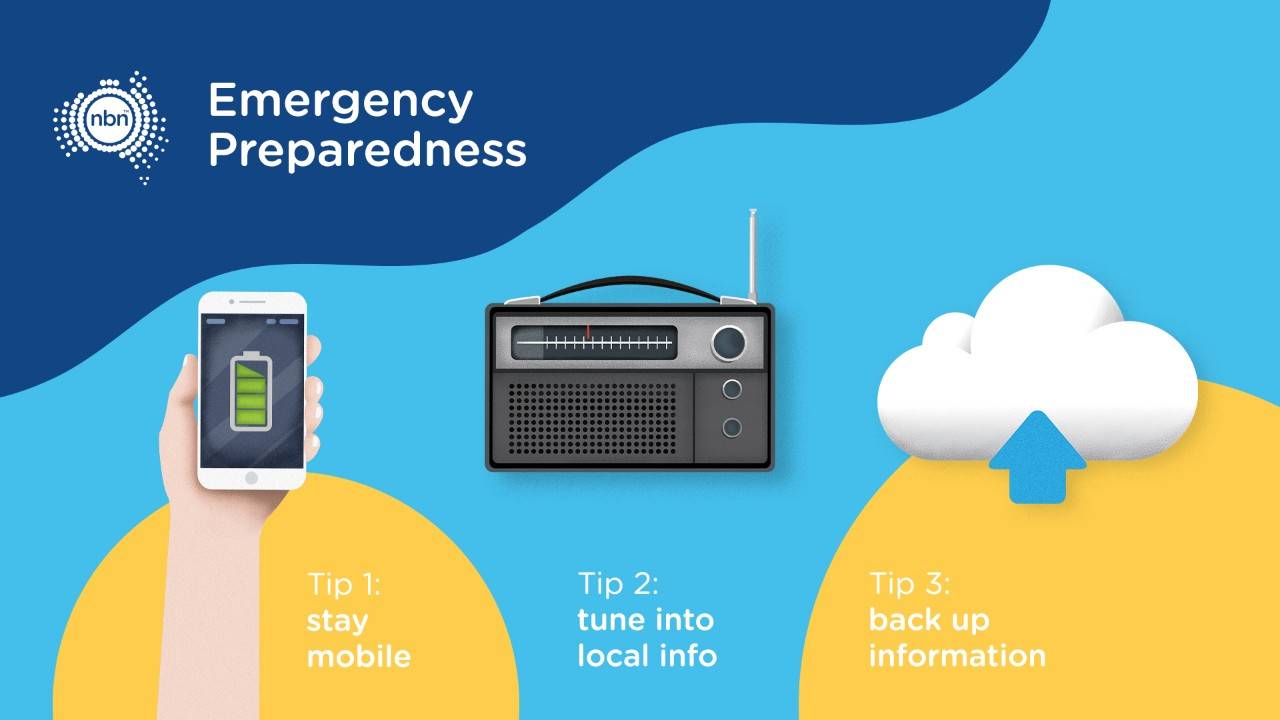 Back to Top
Read more about preparing for an emergency.
* 2019–20 Australian bushfires—frequently asked questions: a quick guide