At NBN Co, we are driven by a simple purpose: to bring broadband connectivity to the nation and help bridge the digital divide between young and old, city and country, Australia and the rest of the world.

And we are well on our way to achieving that ambitious goal. Last year we reached the halfway construction mark after rolling our infrastructure beyond 5.7 million homes and businesses. Today, we can celebrate another important milestone, with the connection of our four millionth premises to a service over the nbn™ broadband access network: halfway through our target of connecting eight million premises by 2020.

But what many might not realise is that of those four million homes and businesses now connected to services over the nbn™ access network, the majority (58 per cent) presently hail from regional and rural Australia.

That somewhat surprising statistic comes as our journey to prioritise those who most need access to broadband has hit a significant milestone. Nearly all1 eligible homes and businesses outside of major urban areas are now in design, construction or able to order an nbn™ service from a Retail Service Provider (RSP).

Rural and regional Australians are connected like never before, and the nation is better for it.

With the rollout of the nbn™ network on the home stretch in regional Australia, NBN Co's Joe Dennis returns to his hometown in Collingullie, NSW to discover the difference connectivity is making to local business owners.

The nbn™ access network not only provides better internet connectivity in Australia’s regions, it also helps encourage fiercer competition among our RSPs. Before NBN Co rolled through regional and rural Australia, many communities were stuck as broadband backwaters because their only access to the internet was through a dial-up service from one or two RSPs.

But in the past few years, as the nbn™ access network has been rolled out through these regions, we have seen internet and phone providers of different sizes enter markets that were previously served by a small handful of telcos. This helps increase competition and encourages RSPs to provide better-value broadband services for consumers and businesses.

This rural prioritisation has helped unlock the social, economic and entertainment possibilities through access to fast broadband. In the 2017 financial year, the nbn™ access network is estimated to have helped drive $450 million in additional gross domestic product and the creation of an additional 1750 jobs in regional Australia. Working from home in nbn™ access network-connected regional areas rose by 3.3 per cent from 2011–2016, versus a rise of 2.2 per cent for the national average.

It’s helped regional hubs, like Victoria’s Gippsland and Queensland’s Mackay, create new employment opportunities. These communities are expected to generate hundreds of new businesses and thousands of new jobs in coming years, in part, thanks to access to services over the nbn™ access network.2

Since connecting the first homes and businesses some six years ago, Australia has soared up the Organisation for Economic Co-operation and Development (OECD) ranks when it comes to internet equality, jumping from 29th in 2012, to 17th today. And as the rollout progresses, research commissioned by NBN Co forecasts that Australia’s position in terms of internet equality will leap into the top 10 by the time the network rollout is complete (assuming all other OECD countries are held constant at their 2016 figures).3 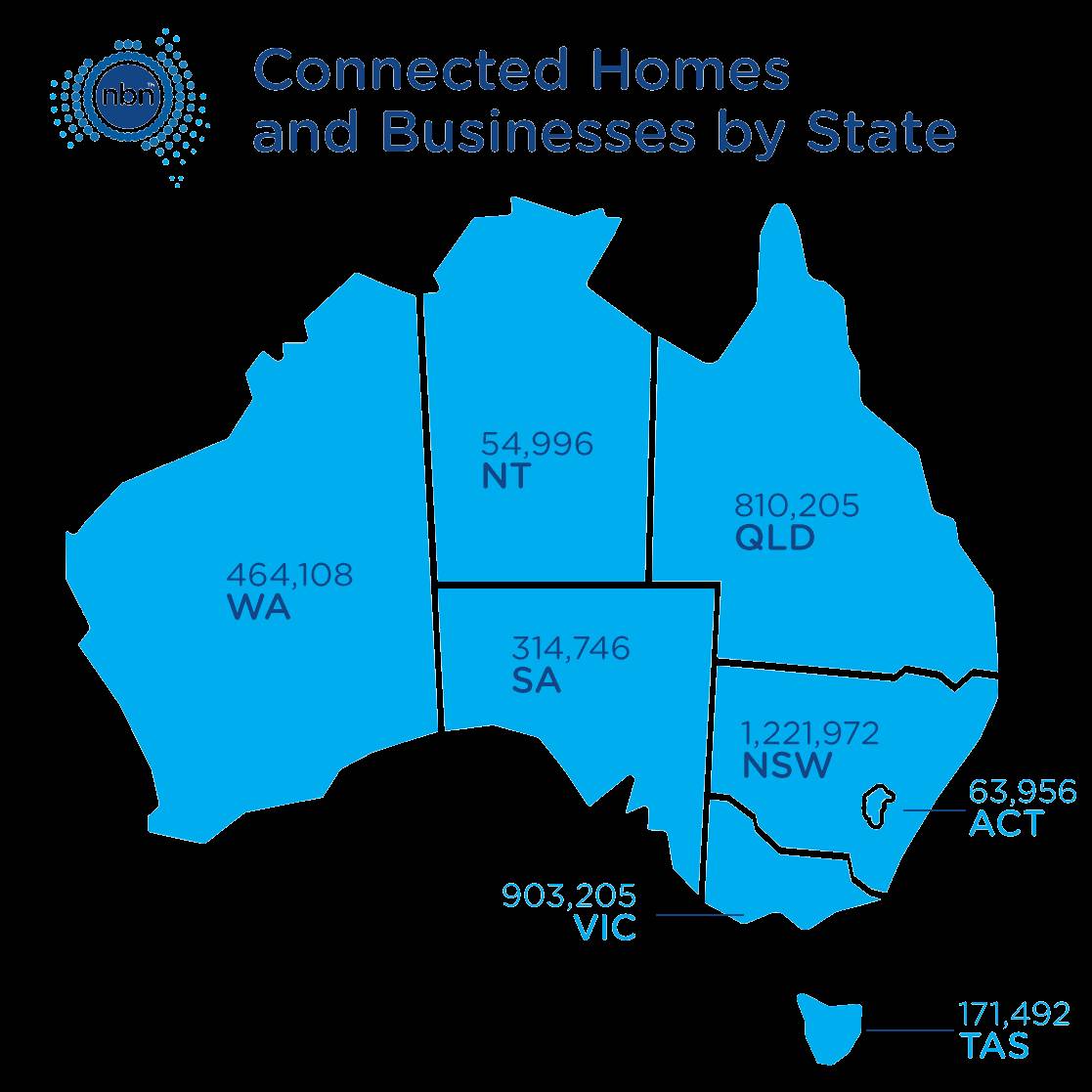 The number of homes and businesses connected to the nbn™ access network by state and territory. The data contained in this map reflects NBN Co’s position for the week ending 21 June 2018. For the latest rollout information, please view the latest report on our website.

Preparing for disruption: Technological Readiness Ranking, a recent report from the respected Economist Intelligence Unit, forecast Australia (alongside Singapore and Sweden) will be first in the world for technological readiness (based on internet access, digital economy infrastructure and openness to innovation) from 2018–2022.4

That study looked at 82 of the world’s largest economies based on how well-prepared they were for technological change. It found that the increasing ubiquity of Australians’ access to broadband would play a vital role in propelling us up the ranks.

These acknowledgements, of course, would not be possible if we were only focused on connecting the profitable metro areas that other nations and large telco providers have historically targeted.

No corporation or nation in the world is attempting to do what NBN Co is doing – connecting an entire continent with a wholesale broadband access network.

The rollout of the nbn™ access network to rural and regional Australia has been driven by a very simple purpose: that no matter where you live in this vast land, you are entitled to the same minimum services and access to the same opportunities as those living in capital cities. 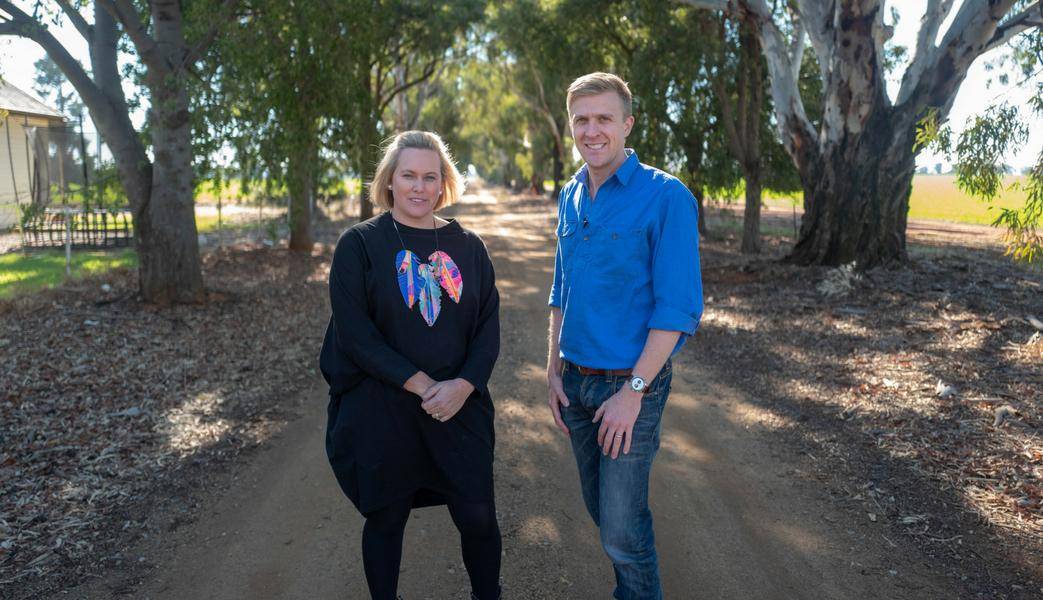 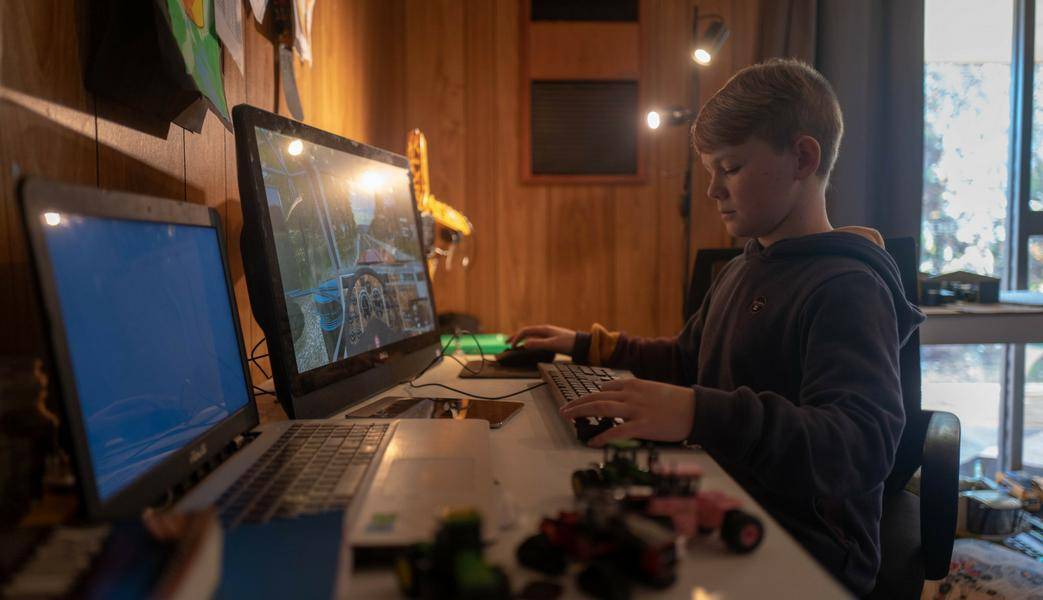 The costs to serve these hard-to-reach premises in rural and regional Australia can be high, but we will continue to invest in our network to meet demand and help deliver the best possible broadband experience for Australians. We believe the benefits for consumers and the nation are worth it.

Providing broadband access to areas that were deprived of it helps usher in new competition and reduce the tyranny of distance. It also helps drive economic and social benefits by supporting employment, education, health, agriculture, business and emergency services.

Now the real opportunities start for these communities to leverage this broadband connectivity, plan for the future and prosper in the digital economy.

Discover how NBN Co is making significant strides for business.

1 The total number as of 27 June 2018 is 99.92 per cent in design, construction or complete, with the exception of some premises such as remote offshore islands, complex rural sites and some government premises.

2 The Connecting Australia report was commissioned by NBN Co through independent research agency AlphaBeta in 2017. It combines national census data with an Ipsos survey of 3500 individuals across 1700 postcodes in metropolitan, regional and remote areas, including those connected to the nbn™ access network and those not connected.

3 Methodology on internet speed and access data for Australia and other OECD countries can be viewed here.