Skip to main content
Related Articles
Striking up the broadband on Mount Tamborine Broadband for the Bush: An alliance for inclusion Overcoming rollout challenges in remote Western Australia

Wildlife and the wet season: remote monitoring in Arnhem Land

NBN Co’s remote monitoring program, launched a year ago, has hit a major milestone by connecting the most remote part of our Transit Network – or what in reality is the network’s backbone.

Staff in Arnhem Land have been able to beat the wet season – and local wildlife including water buffaloes, snakes, mites and mosquitoes – to install Optical Time-Domain Reflectometer (OTDR) equipment between Darwin and Nhulunbuy.

The installation had to be completed before the wet season made sites inaccessible, and also before the hot weather made the site build activity too difficult. Apart from the seasonal factors, Australia’s world-famous wildlife also presented a unique set of circumstances and a layer of unpredictability.

This 1000-kilometre fibre link is now able to remotely monitor the optical quality for homes and businesses.

About the nbn™ Transit Network

The nbn™ Transit Network is a critical part of the nbn™ broadband access network’s deployment and is made up of 60,000 kilometres of fibre-optic cabling.

It links hubs across Australia to the wider nbn™ access network, and moves large aggregate volumes of data between locations, helping capacity get to homes and businesses.

It connects to NBN Co’s 121 Points of Interconnect – typically located at telephone exchanges – which is where phone and internet providers plug their own network into the nbn™ access network. 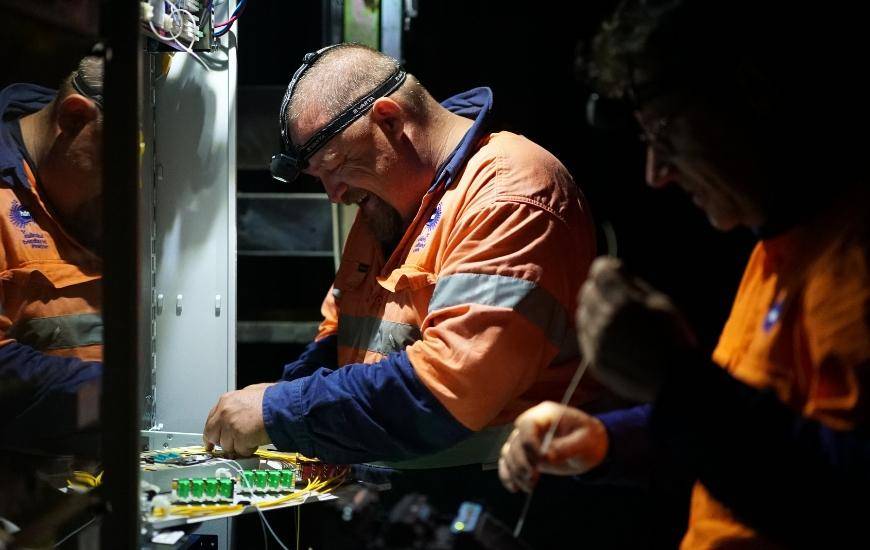 As part of a continuous improvement exercise, NBN Co’s remote monitoring program is designed to speed up response to fibre faults on the nbn™ Transit Network.

While the Transit Network is the ‘backbone’ of the nbn™ access network, OTDR devices allow constant remote monitoring of this backbone network by sending light pulses through fibre cables to measure the health of the connection.

With the successful deployment of the equipment, NBN Co can now quickly identify and monitor the location and nature of a fault – should one occur – via the Network Operations Centre in Melbourne.

This means that NBN Co’s field team no longer need to physically be on site to verify reported faults. In some cases, it used to take more than 24 hours for a field worker to investigate a fault on site; this report is now almost instantaneous, even for very remote areas.

The capability of the OTDR equipment is especially a benefit for the hardest-to-reach areas across our vast country. With that in mind, the installation has been extended to other states, including remote areas of Western Australia, South Australia, the Northern Territory, New South Wales, Queensland, Victoria and Tasmania.

NBN Co currently has more than 250 OTDR units installed nationwide that monitor 890 fibre links, and around 500 total sites will be included by the end of the upgrade project across the country.

Discover how we connect one of the most remote places in the country.