Mundaring is a suburb located 34 kilometres east of Perth in Western Australia.

Best known locally as the heart of the Perth Hills, the region boasts popular walking trails, spectacular state forest, and ample opportunity to soak up art, history and culture.

Yet, it’s fair to say, those working hard to roll out the nbn™ access network in this part of the country haven’t had much time to enjoy what the area has to offer.

Instead, they could be forgiven for being more preoccupied with the fact that 80 per cent of the build in these parts is comprised of rock.

And not just any rock either – it’s some of the toughest encountered in the entire rollout.

So much so, says Perth-based Project Manager at NBN Co Rosie Tancred, our Delivery Partner Downer has so far used nine drills from four different companies to meet its scheduled construction deadlines. 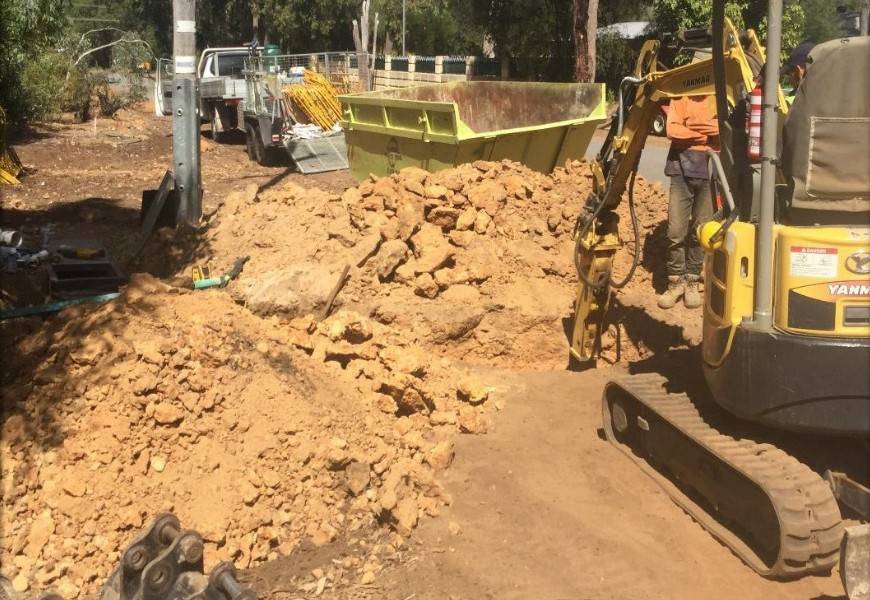 Some of the hardest rock in the entire nbn™ access network rollout has been encountered at Mundaring, east of Perth.

Rock hardness is measured in megapascals (MPa), with rock that’s measured at 25MPa or greater about as tough as concrete.

And the rock faced at Mundaring?

“The hardest rock we have encountered so far in Mundaring has been 209MPa,” says Tancred.

Not surprisingly, tackling such toughness meant calling on some of the biggest All Terrain drills ever seen on the national infrastructure project. 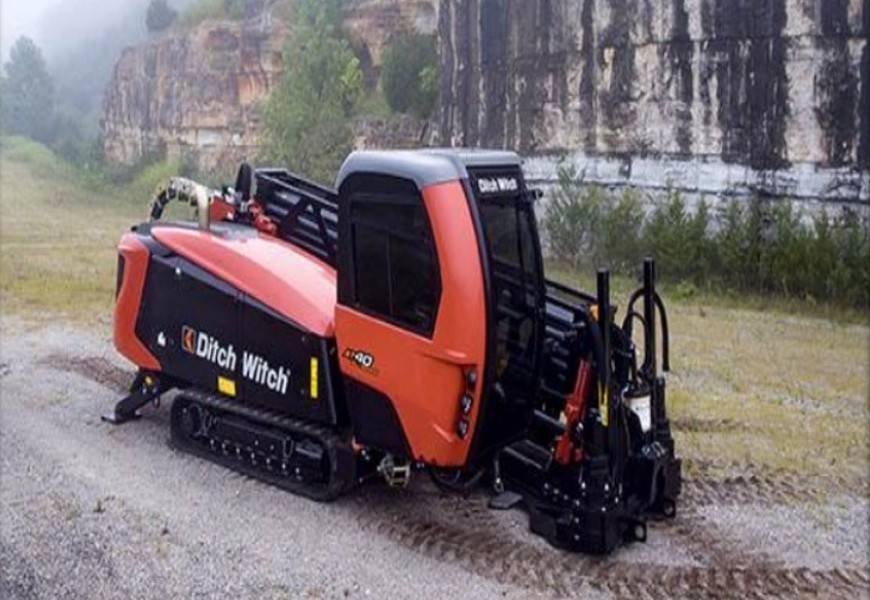 One of the drilling machines used at Mundaring is dwarfed by the huge rock wall in the background.
Breaking through solid rock aside, Tancred says Mundaring has been a challenging region to construct.

For a start, there are 100 Fibre-to-the-Node (FTTN) street cabinets spread across an area of 162km in side-by-side regions known as Service Area Modules (SAMs).

The average SAM, by contrast, has about 15 nodes that take a crew of four between three and four weeks to complete.

The large number of nodes in Mundaring means it will take a workforce three times that size at least three months to construct.

Delivery Partner Downer has faced installing more than 21km of conduit across both SAMs. Due to the narrow verges and dense bushland, drilling has been the preferred option.

And, says Tancred, the rocky conditions have slowed construction considerably.

“The sheer size of the combined area has seen the team face both logistical and supervision challenges.

Compounding the situation, the hard and dusty conditions contribute to the regular break-down of machinery.

Despite all this, the team is making progress.

Headway in the hills

Work is proceeding according to schedule, with 9km of the nbn™ access network rollout – including 50 nodes, 273 pits and 82km of hauled cable – already completed.

In the neighbouring SAM, 15km of build has also been completed with a further 5km to go and on-track to be finished in mid-July.

The combined challenges – and the efforts to overcome them – make Mundaring one of the most expensive areas to construct on the nbn™ access network rollout.

Vacuum excavation has also been used to safely extract rock debris and to ensure there were no asset strikes during construction. 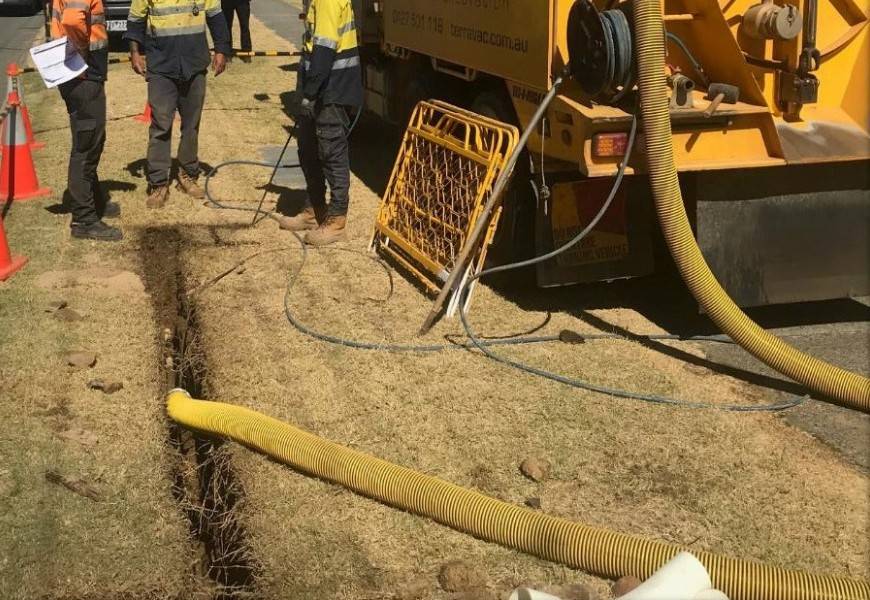 Vacuum excavation in action.
Additional oversight was also needed in the form of three supervisors to manage a team of 50 construction partners.

As if all that wasn’t enough, a major upgrade of the Great Eastern Highway coincided with NBN Co’s works – impacting Delivery Partner Downer’s access to the road verge.

In keeping with the ‘go hard or home’ nature of the build, not just any old fibre cable was being hauled either. It was equal to the biggest fibre cable Downer has hauled.

Says Tancred, “Extra care was needed when handling due to its size and weight.”

When the going gets tough though, those toiling away in Mundaring may like to take inspiration from the nearby engineering feat that is the Mundaring Weir. 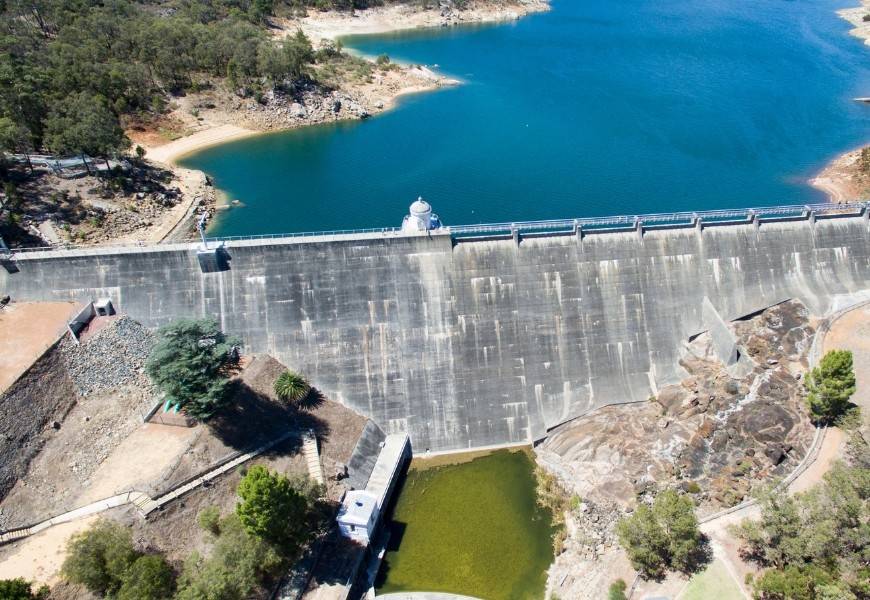 Designed to supply much-needed water to the Coolgardie goldfields, when completed in 1903, the weir was the highest of its type in the Southern Hemisphere.

Boasting an original height of 39 metres – it has been extended in the years since – issues with the granite rockface forced the builders to extend its concrete foundations 27 metres below the river bed to reach a satisfactorily stable base.

The pioneering builders of the Mundaring Weir were determined to overcome construction challenges for the betterment of future generations – a feeling the team rolling out in Mundaring can relate to very well.

From the Perth Hills to the Adelaide Hills – discover how we tackled tough below-ground rocks near the South Australian capital.